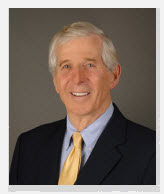 Bob Ritter has been in life insurance sales and sales management for over five decades. He started with Mass Mutual in northern New Jersey. At age 26, he was appointed General Agent by Mass Mutual in Oakland, California — the youngest General Agent ever appointed. Three years later, he took over a New York City agency for Mass Mutual. He twice received the National Manpower Award, the company’s most prestigious award for developing sales leaders.

In the early 1980s, Bob formed InsMark, a company dedicated to producing transferable marketing techniques for a wider group of producers. The success of InsMark has been phenomenal as 100+ companies have sponsored InsMark products utilized by over 30,000 producers. He guides his business career based on the following premise:

He is a past member of the MDRT Foundation’s Board of Directors and a member of the Split Dollar Sub-Task Force of the Association of Advanced Life Underwriters (AALU) during the lead-up to the Final Split Dollar Regulations issued in 2003. He is also the Founder and Past President of the Diablo Advocates dedicated to youth opportunities.

He graduated from The Lawrenceville School and Williams College. While at Williams, he also played lead cornet in the first college jazz band ever to play in Carnegie Hall. Called the Spring Street Stompers, this Dixieland jazz group won the Arthur Godfrey Talent Scout show on CBS (#1 in the ratings at the time), appeared on the Tonight Show on NBC, and frequently played at the top jazz clubs in Boston and New York.

Bob and his wife, Laurel, live in Alamo, California. They have eight children, 22 grandchildren, and four great-grandchildren.